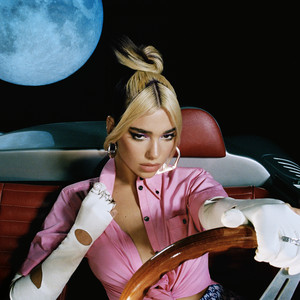 “Break My Heart“ is the fourth single from British singer-songwriter Dua Lipa’s “disco-orientated” second studio album, Future Nostalgia, where Dua finds herself questioning her relationship choices.It was first revealed in an interview with SunriseOn7 on March 2, 2020, that the upbeat disco-pop song will be pushed as the album’s third official single:I’m really excited for [“Break My Heart”]. That’s gonna be the next song that everyone’s gonna hear. I just shot the video for it.On March 18, 2020, the length of the track was revealed on iTunes, hinting that it could be released soon. A day later, Dua took to social media to share a line from the song with fans, as well as what seems to be a frame of an unannounced music video. Following the teaser, Dua unveiled the cover art for the single and its release date via social media. It was later revealed by Dua via her Instagram live that the song would drop two days earlier than planned — with the album’s release being moved up to occupy its March 27 release.It is also worth noting that “Break My Heart” marks Dua’s first time collaborating with renowned producers The Monsters & Strangerz and watt.