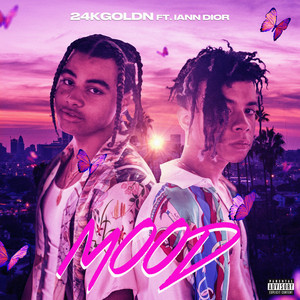 24kGoldn enlists the help of friend iann dior for “Mood.” The two first collaborated together on iann dior’s “gone girl,” which credits 24kGoldn as a co-writer.Throughout the track, the two reflect on being stuck in a toxic relationship with a woman who is fickle, indecisive, and often manipulative. Despite the tone of the subject matter, the track is upbeat and poppy, carrying a similar tone and structure to “Never is Enough” from iann dior’s debut album Industry Plant.The song was first teased on an Instagram story from 24kGoldn on May 1 2020. A few weeks later on May 22, the same date as the release of iann dior’s single “Prospect,” producer Omer Fedi posted a video of 24kGoldn and iann dior dancing to the track on his Instagram story, with the captionU think they ready?On July 19 2020, 24kGoldn confirmed the track after uploading a Triller of the song with iann dior to his Instagram.